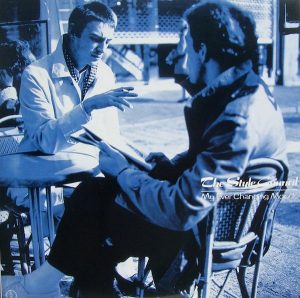 Album: My Ever Changing Moods
Year: 1984

So, let’s start with some record company shenanigans, shall we?

The Style Council’s debut album was called Cafe Bleu in every part of the world except for the U.S. And that’s because, when the “My Ever Changing Moods” single was released in the U.S., it actually got some traction here — unlike every single The Jam had ever released — and the Geffen marketing folks decided to make it the first track on the album and also call the album My Ever Changing Moods.

It gets even trickier: the version of “My Ever Changing Moods” that was actually on Cafe Bleu was a Weller and piano version that wasn’t released as a single, while the version on the U.S. album was the longer version that was on the U.K. 12″. Oh, and, for good measure, Geffen also stuck on the other U.K. non-album single, “A Solid Bond in Your Heart.” The reason that I bring up all of this was that when I started researching this post a few days ago, I had no idea about any of this, because I stopped paying attention the Style Council after this time.

Which isn’t to say I didn’t like the song “My Ever Changing Moods,” — or even the other non-album U.K. single, “A Solid Bond in Your Heart” that Geffen stuck on — but I didn’t like any of the other songs on the album. I didn’t realize it, but Paul Weller had John From Cincinnatied me. You see, once upon a time in the mid-2000s, there was what might be my favorite TV show, David Milch’s utterly tremendous Deadwood. Deadwood ran for three seasons on HBO, and was all set to have a fourth season when, suddenly, it wasn’t going to have a fourth season after all.

A couple of years later, Milch’s follow-up, John from Cincinnati, appeared. And while people whose taste I respected really enjoyed it, I just couldn’t. I was still too busy wanting more Deadwood. Just like two decades prior, I wanted more Jam.

This is not right or fair. And totally against my utter belief that artists should follow their muses, consequences be damned. But there you are.

None of this is to denigrate “My Ever Changing Moods” as a song. It’s a great song, full of cool-sounding horns and Weller’s piercing wah-wah guitar, and lyrics that I don’t even really notice all that much because I’m too busy listening to that guitar and horns. But of course, Paul Weller singing about his mercurialness is never a bad thing.

And the coda, with the horns, vocal harmonies and Weller’s guitar approaches the frenzy of The Jam. Approaches, because frenzy wasn’t really part and parcel of what The Style Council was aiming for.

Paul Weller was still a god in the U.K at the time, so “My Ever Changing Moods” went to #5 over there, but the big surprise is that it was an actual hit single here, making it to #29, by far the best he’s ever — or will ever — chart here in the colonies. (The best The Jam ever did was “A Town Called Malice” making #45 on the Billboard Dance Charts.)

Did I say “was still a god?” Actually, he still is. Since 1978’s All Mod Cons, every single studio album he’s released in any incarnation — with the exception of the Style Council’s 1988 swan song, the #15 Confessions of a Pop Group (if you don’t count the album they made afterwards but didn’t get released for a decade) — every single studio album Paul Weller has released has made the U.K. top ten, and the vast majority, top five. And he was still kicking out top ten singles as late as 2006. That’s 45 years of ownage, during which he’s matured into a beloved elder statesman.

So it doesn’t even matter than whenever I’ve checked in during that time, I haven’t found a lot to love; Paul Weller had a lifetime pass by 1982, and I even kinda love his refusal to make a shitton of money by reuniting The Jam, which he could do tomorrow, and I’d go to if I could. So let’s raise a toast to the ever-changing Mod.

“My Ever Changing Moods”