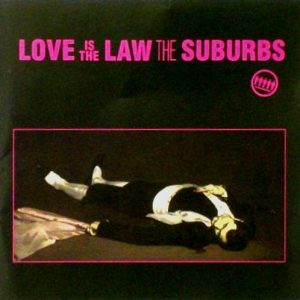 While “Who are The Suburbs?” will always be the answer to the Jeopardy clue “this artist’s self-titled EP was the first release on the Minneapolis label known as Twin/Tone Records,” I do recall listening to their early 80’s albums — In Combo and Credit in Heaven — during the pre-air KFSR days and nothing really sticking.

What did stick, however, was their first single for Mercury, the major label they left Twin/Tone to sign with in 1983. That was, of course, “Love is The Law,” which opened with the rhythm section of drummer Hugo Kalers and bassist Michael Halliday playing a fast dance beat over which almost instantly comes a joyous, near-mariachi trumpet hook from Scott Snyder .

Which I fell for instantly and forever, because it was so unexpected and yet so right. The trumpet was followed by circular and crunchy guitars from Beej Chaney & Bruce C. Allen, and eventually Chan Poling’s vocals, which are classic new wave:

Well I was walking through the middle of town
And I said to myself, “What’s going on?”
People breaking the law just to make ends meet
People breaking their hearts just to stay off the street
And written on the wall for everyone to see
Was “Love is the law” right there on the street
It said

The way Poling sings it, there really isn’t a break from the verse to the chorus, you just kinda assume because it features the title, the second part of it is the chorus, but you’re not entirely sure, because you’re too busy enjoying how it all swirls together right down to how backing vocalist Teri Paul just kinda sneaks in near the end. Also cool: the rhythm guitar during that chorus, slashing and angular.

After that, it breaks back down to just the bass, drums and guitar for awhile before Poling returns to seen a second verse climaxed by repeating “you gotta give it if you get it” over and over and over over, setting up another “love is the law” chorus, which is followed by a sax solo, and finally, that wonderful trumpet line which ushers “Love is the Law” to its close.

To my ears, this was exactly the type of song that could crossover onto MTV — because of course they made a video — and do some damage on the charts. Catchy, dancey, slick, but not too slick, and did I mention that trumpet hook? But alas, it was not to be, and as near as I can tell, the were dropped by Mercury, made a self-titled album for A&M 1986 that went nowhere and broke up, though Poling reformed the band in the 2010s.

“Love is The Law”