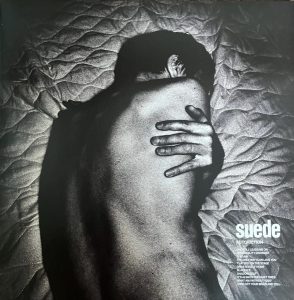 I believe that this is the longest time gap between two songs I’ve written about by the same artist. Yesterday’s Suede song, “Metal Mickey,” originally came out as a single in 1992, and today’s Suede song, the gloriously soaring “She Still Leads Me On” came out in 2022. That’s thirty years. Of course, given that which songs I write about and don’t write about is the very definition of arbitrary, it’s also a statistic that means nothing — like postseason counting stats — but I figured that I would point that out anyways.

So you’re probably asking what happened in that thirty years anyways? Well, I moved from Fresno to the Ba–oh, you wanna know what happened with Suede. Right. Fine. In 1992, they put out their second album, the more experimental Dog Man Star, after which guitarist Bernard Butler left the band to be replaced by a 17-year-old kid named Richard Oakes, and they also added a keyboardist named Neil Codling, and made three more records before breaking up after 2002’s A New Morning.

And here’s the thing, when they got back together a decade or so later, it was all the same people: singer Brett Anderson, of course, but the band after the reunion was basically the same as the band before the reunion, including drummer Simon Gilbert and bassist Mat Osman, who have played on every single Suede album in the past 30 years. That almost never happens, especially a band with a founding singer. Eventually that singer totally takes over and records what are essentially solo albums under the band’s brand.

That doesn’t seem to be the case with Suede, and so their ninth album, 2022’s Autofiction, rocked harder than you’d expect from 30-year-vets, and opened with what is now my favorite Suede song, “She Still Leads Me On.” Opening with a cool crawling guitar lick from Oakes, you would think by the title that “She Still Leads Me On” is Anderson’s song about some model he’s banging. But nope, it’s about his dead mother, because that’s what rockers nearing sixty are more likely to write about. Sure, they still might wanna sing about fucking models and doing coke in back rooms, but who’se gonna believe that

As they roll into the pre-chorus, Oakes piles on the guitars, as Anderson gets as direct as you could possibly be.

But that’s all just build up to the chorus, which is aiming for the heavens, aided by keyboardist Codling, but mostly just Anderson going as big as he possibly can.

His vocal hiccups every time he sings the word “leads” is utterly magnificent, adding a shit ton of emotion to a gloriously messy chorus, which they double and triple on at the end of the song because that what you have to do. Oakes also helps with some massive guitar, but it’s really just all Anderson from start to finish.

“She Still Leads Me On.”