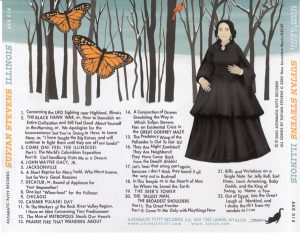 Utterly bursting at the seams with ambition and musicality, Sufjan Stevens 2005 album Illinois betrays just how over the top it is by having at least three different titles. You can refer to it as Illinois, Illinoise, or the hilarious Come on and Feel The Illinoise!

Oh, and then there are the song titles: my favorites are “Prairie Fire That Wanders About” and “They Are Night Zombies!! They Are Neighbors!! They Have Come Back from the Dead!! Ahhhh!”, but I also have to give a shout out to “The Black Hawk War, or, How to Demolish an Entire Civilization and Still Feel Good About Yourself in the Morning, or, We Apologize for the Inconvenience but You’re Going to Have to Leave Now, or, ‘I Have Fought the Big Knives and Will Continue to Fight Them Until They Are Off Our Lands!'” because it’s an instrumental.

But that last title goes to the nut of why people either love or hate Illinois — or Sufjan Stevens, for that matter — it’s can be all too much. Not to mention that Illinois was the the second installment of Stevens’ “50 States” project, where he does an album for each of the states in the Union. It’s now 17 years later, and we’re still waiting for the next one, which means I’m beginning to worry that he’s not gonna finish it!

Anyways, what works for me about Sufjan — and, spoiler alert, we’re gonna spend at least a week with him — is that he’s incredibly tuneful, writing songs that wake you up in the middle of the night just so you can quietly sing along with them. Like today’s song “Decatur, Or, Round of Applause for Your Stepmother!”

Most of “Decatur, Or Round of Applause for Your Stepmother!” is a duet between Sufjan and Matt Morgan, as they sing impressionistic lyrics about things that happened near Decatur.

Musically, “Decatur, Or Round of Applause for Your Stepmother!” is based around a hypnotic accordion riff — yes, I said “hypnotic accordion riff” — punctuated by a banjo and accented by a twinkling guitar. It’s really all about the harmonies between Morgan and Stevens, especially on the third verse.

The sound of the engines and the smell of the grain
We go riding on the abolition grain train
Stephen A. Douglas was a great debater
But Abraham Lincoln was the great emancipator

The broken harmony on “great emancipator” — and I’m not really sure which of the two it is — is utterly exquisite, the kind of thing you listen to a song over and over and over again just to see if you can get to the bottom of it. But of course you can’t. In the end, “Decatur, Or Round of Applause for Your Stepmother!” turns into a round, as overdubbed Stevenses and Morgans sing against each other.

It’s all ridiculously lovely, and when they break into the literal applause for the titular Stepmother, you’re more than tempted to join them.

“Decatur, Or Round of Applause For Your Stepmother”