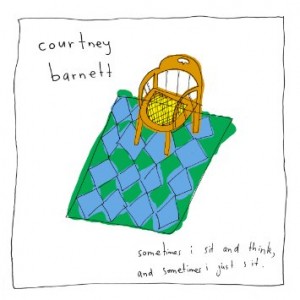 2015 is only halfway over, but I somehow doubt I will love a song this year more than I love “Depreston,” Courtney Barnett’s brilliant ode to a moment of realization that the world is bigger and more complex than you could have ever imagined.

“Depreston” is hardly the only great song on Sometimes I Sit and Think, and Sometimes I Just Sit, but its aching guitar hooks and strong sad melody — and the matter-of-fact way she sings it — jumped out at me from the very moment I heard it. That the lyrics tell a singular, relatable story just makes it that much more fantastic.

Perhaps tiring of the hipster bohemian enclave they’re living in, Courtney and her roomie decide to check out a place in . . . if not the ‘burbs, then at the very least far enough from the cool part of town that all of their friends will probably look at them in the same way we used to look at friends who lived in North Fresno instead of the Tower:

And so they’re off to Preston, where over a quiet melancholy guitar and almost a country beat, Courtney describes what she sees:

We drive to a house in Preston
We see police arrestin’
A man with his hand in a bag
How’s that for first impressions?
This place seems depressing
It’s a Californian bungalow in a cul-de-sac

But of course they drove all this way, so they might as well check it it out, right? And you know, maybe there are some advantages to living out in Preston. Or North Fresno.

It’s got a lovely garden
A garage for two cars to park in
Or a lot of room for storage if you’ve just got one
And it’s going pretty cheap you say
Well it’s a deceased estate
Aren’t the pressed metal ceilings great?

At this point, she starts noticing things about the life of the person who used to live there. You see, this house has a history. A history that suddenly jumps out at her.

It was something she’s never even considered before, but suddenly it’s all she can think about. Who were these people? What was their life like? Who were their loves? What were their losses? Did they drink coffee or tea or both?

When you’re young you can pretend you’re the first person that’s ever lived somewhere. Or at the very least assume that none of the previous tenants had lived there had long enough to seep into the very fabric of the place.

If you move around a lot, you can ignore all this stuff for a long time. You have to. Right up until the moment when you can’t. For me, it wasn’t until I bought a house, and even then, it was mostly wondering why the previous owner made all of those stupid decisions. Usually to save money.

By the way, maybe they do it differently down under, but leaving that picture out seems like bad form on the part of the Realtor. In fact, when Rox & I sold our house, the first thing that Jackie said was to remove all of the photographs in case Courtney Barnett came by.

And now you see why. That bungalow is a place where somebody lived for a long long time. It’s always going to be their place in spirit. Courtney realizes that she couldn’t live a day there without wondering about their lives, which means it’s time for her to play a guitar solo through a Leslie amp and think on it for awhile.

She concludes that it would only work if she really was the first person to live there:

Seems a bit drastic. And, of course, way out of the means of someone who knows exactly how much she’s saving on coffee each week. So that will never happen. I guess it’s back to the cool part of town for Courtney. For now.

“Depreston” performed solo on “The Tonight Show” in 2015