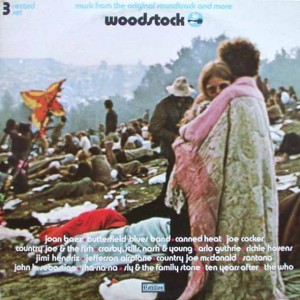 And one time — gonna guess it was either 1979 or 1980, the tenth anniversaries of the festival and the film, respectively — we went to the Country Squire Theatre at First and Ashlan to see Woodstock. I don’t remember much about the Country Squire, except that it wasn’t a place I went to very often. It wasn’t close to where I lived, and it didn’t have a lot of choices on which films you could see, like the UA theaters did.

But they were showing a revival of Woodstock for cheap, and that meant that we could see those legendary performances by The Who, Sly & The Family Stone & Jimi Hendrix we’d been reading about our entire lives.

But, at Woodstock, where Steven Stills famously said they were “scared shitless,” they were stripped from all of the studio gloss and overdubs, and — augmented by some clever lighting and that infamous split-screen — what was left was three dudes with guitars singing for their lives.

Sure, the harmonies were rough, but they were still beautiful. In fact, they were more beautiful because they were imperfect, as David Crosby and Graham Nash slid in and out of the exact notes they wanted to hit, all the while watching Stephen Stills, hoping that he’d hold it together for all of them.

Which he was. Stephen Still is a wonder here: using his guitar as the glue while challenging Crosby & Nash on every turn with an absolutely inspired lead vocal performance, sliding in just a bit early at some points and holding back at others. Sure, they were singing to 500,000 people or whatever, but it had the feel of something they were just making up on the spot.

You know: musicians making music for the sheer pleasure of it and because it’s the only thing they they’ve got.

Naturally, this is only partially conveyed in the only YouTube clip out there. For whatever reason, the audio & video aren’t quite synced up, so it’s a little off-putting.