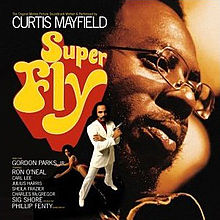 I mean, I loved the chorus:

Oh, Superfly
You’re gonna make your fortune by and by
But if you lose, don’t ask no questions why
The only game you know is Do or Die
Ah-ha-ha

But even the chorus had that weird pause before every line where Mayfield unnaturally paused for just a moment before diving back into it. Incredibly catchy, but almost too funky for 11-year-old Jim.

And of course, that’s what it was: one of the hardest funk songs to ever make the top ten. All of those horn blasts on the off-beats, the double-time drum beat that drove the whole thing except when the drummer laid out and that bassline — oh man, that bassline. Joseph “Lucky” Scott’s bassline was running interference for the rest of the song, blocking everything in its path like Joe DeLamielleure springing O.J. Simpson for another 20-yard gain.

That bassline allowed the horn section to toss in blasts whenever the hell they wanted, it allowed the drummer to power through the song and it allowed Mayfield to sing the amazing melody in his unearthly falsetto. It held the song together while ripping a hole in the fabric of the universe.