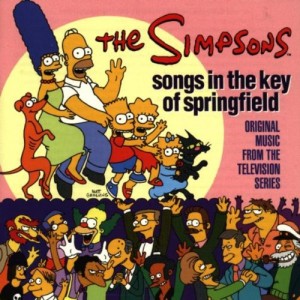 Album: Songs in The Key of Springfield
Year: 1989.

I never liked Oingo Boingo. They always seemed too self-consciously wacky to me, like Danny Elfman had heard about new wave from some friends and thought “hey, I can do that!” And proceeded to do so, making sure every note was misplaced just perfectly.

Naturally, the same things I disliked about Oingo Boingo were the things I loved about his scores for the 1980s Tim Burton films, from the frenetic Pee-Wee’s Big Adventure score to the stately Batman soundtrack, so I can now look at Oingo Boingo as Elfman’s extended demo tape for his true vocation as composer of awesome film scores.

That’s mean, but the joke’s on me. There is no way that 30 years ago you could have told me that Danny Elfman of Oingo Boingo would be responsible for the song I will experience more than any other song in my lifetime: “The Simpsons Theme.”

I’m (probably) never going to get one of the Black Mirror chips where you can access everything that has ever happened to you, but the first thing I would do if I got one is to create a list of how many times I’ve heard every song I’ve ever heard.

That way I could confirm what I already suspect: “The Simpsons Theme” is my most-heard song. No other piece of music has been so consistent in my life for such a long period of time. Basically half of my life at this point. There were songs I loved as a kid and listened to constantly, but petered out as I became an adult. Even my earliest singles that I still love unreservedly, like “Jumpin Jack Flash,” don’t have as many listens.

Albums like Quadrophenia, Exile on Main St.., Murmur and Let it Be are eternal, but I still haven’t had the regular exposure to any song — not even “Tumbling Dice” — on those records like I have “The Simpsons Theme.”

And the only other TV show theme would be “Suicide is Painless” from M*A*S*H, cos I watched first-runs and reruns and syndicated episodes constantly for years — until the mid-1980s. Since then, only a trickle.

Of course, the exposure to “The Simpsons Theme” started slowly. Twice weekly at first — as it opened and closed virtually every episode — but I recorded every episode until 2001, and my VHS tapes of those first few seasons got quite a workout.

And then, by the mid-90s, the syndication started, so I could randomly come across an episode anytime of day or night. After that, the DVDs appeared, making the rewatches even easier. In fact, we’re in the middle of a DVD rewatch of the first 8 (or 9) seasons as I write this.

“Adrenaline Nightshift” by Japandroids is my most-played song in iTunes at 49. And give that Celebration Rock is three years old now, that translates to almost 500 listens by 2045.

But I couldn’t hazard a guess how many times I’ve heard “The Simpsons Theme” since 1989. Could be thousands.