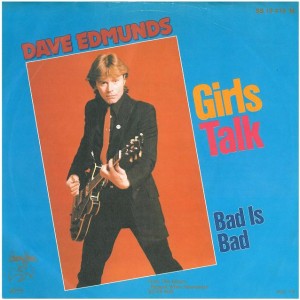 In 1979, Rockpile wasn’t the greatest band in the world — not while The Clash still drew breath — but they were pretty damn close, recording two absolutely stellar albums at basically the same time: Nick Lowe’s Labour of Lust and Dave Edmunds’ Repeat When Necessary. And while I prefer the former to the latter — Nick Lowe was at the very top of his songwriting game — the latter has my favorite song by either artist, Edmunds’ absolutely crushing cover of “Girls Talk”

It explodes in a hail of acoustic guitars and percussion, and before you know it, Edmunds is singing:

There are some things you can’t cover up
With lipstick and powder
But I heard you mention my name
Can’t you talk any louder?

Meanwhile, Rockpile are charging forward without even stopping for breath, with Bremner & Lowe repeating backing vocals when necessary while Williams mimics a perpetual-motion machine. It’s a deceptively tricky arrangement, which you don’t really notice because it’s so relentless: verse after verse after verse that eventually finds the chorus, sometimes with a tricky stop-time part just preceding it, and sometimes not.

And then, because they know they’re making a classic single, Billy Bremner does one of those guitar solos where the guitar just plays the melody of the verse instead of a “deedly-deedly” conventional solo. You know, like “A Hard Days Night” or “Smells Like Teen Spirit.” I love that shit.

At the fade, they toss one last bit of magic in:

Oh, and Edmunds sings the fuck out of this, especially any time he gets to “Right here and noww-owwww-owwww”

In England, at least, “Girls Talk,” was a huge hit single, making #4, as it damn well should have in this country, as well. There were a lot of great songs in 1979, and this is at the very top of the list.

Official video for “Girls Talk” (not the best quality)