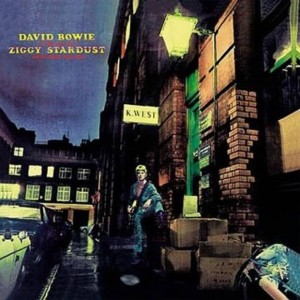 Album: The Rise and Fall of Ziggy Stardust and The Spiders From Mars
Year: 1972

Is it just me, or has the super-rockin’ straight-forward “Suffragette City” never quite fit upon the album where it lives? It’s probably just me, as I’ve always found The Rise and Fall of Ziggy Stardust and The Spiders From Mars to be one of those consensus classic albums that has never completely gelled for me.

Maybe because of that opening riff and pounding piano, but “Suffragette City” never really seemed to fit with rest of the songs on Ziggy Stardust. Those songs were bigger and deeper, while “Suffragette City” was a 1950s-style fucksong dressed up on glam-rock clothing.

Hooked around the call-and-response “Hey man!” and lyrics that get dirtier the more you decipher them, “Suffragette City” was the song that Bowie offered to Mott The Hoople, who rejected it for “All The Young Dudes.” So everybody won, as Bowie feels as fun and loose as I’ve ever heard him, and the band builds and builds towards the inevitable climax, which after a build and a full stop, Bowie infamously calls out (all together now):

Which, of course, was always fun to scream out when The Miss Alans played their charmingly unhinged cover at the end of a particular long and rockin early 1990s set. It was also a cool arrangement bit, as the song was in clearly in its coda — with Bowie repeating “back from Suffragette City” over and over again — making it that much for fun for being unexpected.