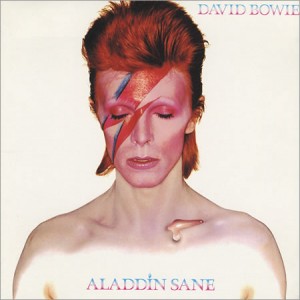 And because of that — or maybe it’s the cause of that — I don’t really have a favorite David Bowie album, per se. When asked — which has pretty much never happened, to be honest — I usually go with Aladdin Sane. It seems to have the highest percentage of songs that slay me: “Watch That Man,” the piano freakout of the title track, and the trio of groove-oriented rockers like “The Jean Genie,” “Cracked Actor” and most especially “Panic in Detroit.”

Fueled by a loose-limbed Bo Diddley beat and lyrics that might have been influenced by Iggy Pop, “Panic in Detroit” is also a showcase for Mick Ronson, who overdubs himself not just a bunch of great riffs, but one searing lead after another, and at the end just goes into freak-out mode.

With Linda Lewis wailing the Bo Diddley beat as part of her background vocals, Ronson all over the place, and Ansley Dunbar & Woody Woodmansey kicking up a percussion dustcloud, “Panic in Detroit” exudes a sense of menace even before you pick up the lyrics about Che Guevara and smashing slot machines.

So when Ronson goes into that aforementioned freak-out mode, it feels like the only natural way for the song to end.

Fan-made video for “Panic in Detroit”