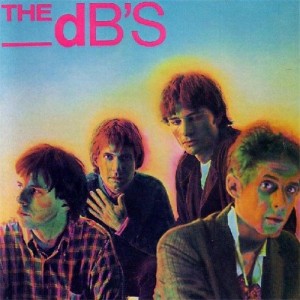 This is how you kick off your career. With a crash of drums and guitars and before you can even catch your breath Chris Stamey is playing Townshend-esque power chords on the acoustic while Peter Holsapple kicks out a jitterly hooky lead guitar.

Meanwhile, drummer Will Rigby is building and crashing underneath these guitars like he’s just been possessed by the spirit of Keith Moon, and damn straight there’s also handclaps and shimmering organ fighting to be heard as well.

And so, before anybody even opens up their mouths to sing, “Black and White” has already activated nearly every single one of my pleasure centers. And it only gets better when Holsapple starts to sing from the high end of his register:

And they stop. Just like that. For an instant, all time everywhere is suspended, until they explode into the chorus:

After the second verse, Holsapple creates some lightning himself on the lead guitar, over even more handclaps before building yet again to that brutal chorus.

Did I say “brutal?” I meant to say tremendously catchy, a chorus that sticks in your head instantly and forever. The way that Stamey sneaks in with the harmony on “mooorrrrrrrre” is sheer genius, as are Rigby’s constant stops and starts and builds and rolls.

In the end — after they all harmonize and emphasize “blaaaaaaaaack annnnnnnnnddd whiiiiiiiiite,” — Holsapple & Rigby stage a duel on the guitar and drums. Rigby wins, of course, but it’s closer than you might think, as Holsapple’s guitar practically skitters completely out of the song trying to keep up.

It all adds up to what’s easily one of the top 5 Power Pop songs ever recorded and the beginning of a four-record run that isn’t quite as storied as it should be. Which is why I’m going to story it.