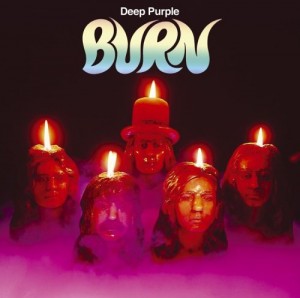 Of course, by the time I discovered and purchased Made in Japan — probably 1974 or 1975 — Deep Purple Mark II had already broken up.

Because things happened at supersonic speed in the world of Deep Purple, Ian Gillan had already resigned, which led to the sacking of Roger Glover while Made in Japan was still riding high in the charts.

So while there was a ton of new Deep Purple for me to discover in the mid-1970s, before 1973 had even ended, Gillan and Glover had been replaced by David Coverdale & Glenn Hughes. Who combined almost made up for about a quarter of the awesomeness of the guys they replaced.

And so 1974 brought Burn, which — when I finally got around to it — just reminded me how much I loved Ian Gillan as a singer. And, sadly, launched David Coverdale’s career as well.

That said: “Burn” had one last amazing Ritchie Blackmore guitar riff, a spiral of notes that turned back around itself and uused the resulting energy to power the whole song. It was riffs like the one that powered “Burn” that made Ritchie Blackmore the name that I always tossed into the hat when we would sit around in high school and have the inevitable arguments over who was the best guitar player in the world.

Do kids still even do that? It feels like a particularly 1970s thing, a relic of the times before punk rock and (later) technology started democratizing who could actually make music that other people heard. But that’s probably a subject for another time.