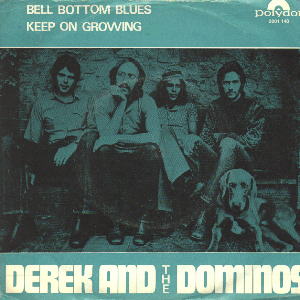 It’s probably not a popular opinion about a guitarist who was once called “God,” but this album is all the Eric Clapton I’ve ever really needed. I preferred Jeff Beck’s Yardbirds, never loved Cream or Blind Faith and found his solo career to be a snooze. Always.

And while the mythology surrounding Layla and Other Assorted Love Songs has always been centered around the guitar fireworks between of Duane Allman and Eric Clapton, Allman isn’t even on one of the key tracks, the stunning “Bell Bottom Blues.”

It starts off slowly, spare and subdued on the verses, and then suddenly Whitlock joins Clapton on the first half of the chorus while the guitars explode:

And at this point, the guitars start sing-songing while both Clapton and Whitlock strain far far out of their normal vocal registers as if the fear and pain and worry were just too much:

It’s gut-wrenching, because as always, when you have to ask her for one more day, you’ve already lost her for the rest of your life.

And it doesn’t even matter if you’re able to pull off one of those guitar solos that sadly plays the melody of the verse. Nor does it matter if you later on overdub several interlocking leads that only underscore the desperation in your voice.

But what does all of your guitar talent even matter if the woman you love ends up with a guy who isn’t even as good as you are?