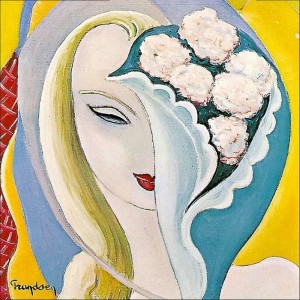 On Axis: Bold of Love, Jimi Hendrix’s “Little Wing” is a psychedelic love song that wanders up to you, quietly says its piece and meanders away, looking for someone else to sing to.

So how Eric Clapton & Bobby Whitlock got the idea to reconceive it as a majestic rock song focused around a staccato guitar riff that sounds like angels assembling their hosts up in Heaven is beyond me.

But there it is, forever the greatest cover of any Jimi Hendrix song that anybody will ever do. Derek & The Dominos version of “Little Wing” is big of a cover song as Hendrix’s own transformation of “All Along The Watchtower” or Husker Du’s psychedelic thrash update of “Eight Miles High.”

How could it not be? Everywhere you look, there’s something amazing happening: Clapton & Whitlock’s rough and ready vocals, or the way Jim Gordon starts every one of his post-riff drum rolls just a skosh too early, so by the time you notice him, he’s already in full flight.And oh yeah, the guitars, which take the heavenly host assembled by the riff and use it wipe out the forces of evil before the song ends.

Aching, intense, and ultimately uplifting, the Derek & The Dominos version of “Little Wing” sits right down in front of you and dares you to look anywhere else. And sticks with you forever.