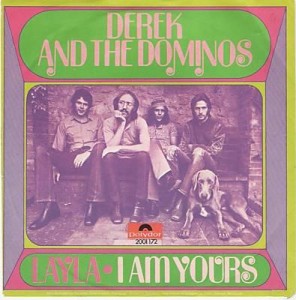 Well now. “Layla.” Right? A song so great at conveying the anguish that Eric Clapton felt about wanting to fuck his best friend’s wife that the bad vibes emanating from every note were enough to keep from an epidemic of Laylas from being born in the 1970s. Not even the most fanatical devotee of the song would want to subject their child to that kind of karma.

Can you tell I’m beating around the bush here? I’m not sure that I can even possibly delve deep enough that is the eternal mystery of “Layla.” I mean, why peak out and get higher and higher and higher and wind down with that extended coda? It’s almost as if “Layla” is a song that provides its own chill-out room.

But that ain’t right either: otherwise Martin Scorcese wouldn’t have used the piano part (which is what I’ve always called it) to underscore the a bunch of grisly murders in Goodfellas if the energy of the piano part was pure chill. Nah, the purpose of the piano part — which was Jim Gordon’s greatest contribution to rock ‘n’ roll — was so that you could think about what you had just witnessed and worry about was to come next.

And what you had just witnessed was somebody — God, right? — not simply running up to the edge, but running alongside the edge, where any single misstep would mean a fatal plunge that might not have even been intended. Any fool can run up to and/or over the edge. But mama, where the fun is is seeing how long you can run alongside the edge without stepping off.

And that’s the first three minutes or so of “Layla.” From the moment the taut riff announces itself there isn’t a moment of rest, not a moment of respite, it’s all just that fucking guitar lick that Eric Clapton got Duane Allman to play and Clapton & Bobby Whitlock screaming “Layyy-la!” like their lives depended upon it. Which, of course it did.

And somehow, they’re able to make it to that last, transcendent, Robert Johnson-quoting final verse:

Let’s make the best of the situation
Before I finally go insane.
Please don’t say I’ll never find a way
And tell me all my love’s in vain.

After that, the guitars are wailing and gnashing their teeth and somebody — Clapton? Whitlock? Allman? Everybody?– is going “whooo whooo whoo whoo whoo” like that’s the only possible noise that anybody could make, and there’s a slide guitar manifesting the vanity of Clapton’s love or is it his insanity? And then suddenly, as if by divine intervention, “Layla” pulls away from the edge, and stumbles towards the relative safety of Jim Gordon’s piano part.

Because the alternative seemed so much worse.