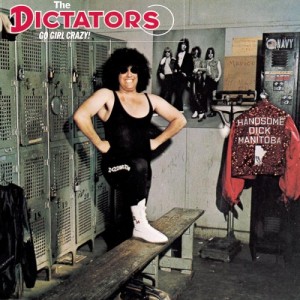 So the weirdest thing happened. As I’ve mentioned before, I try to write these a week or two in advance, so that I have a chance to be thinking about the song (at least subconsciously) for a while before I finally hit the “Publish” button.

Well, a couple of weeks ago, I accidentally published yesterday’s post about “Master Race Rock” instead of saving it as a draft. I didn’t even realize it until the next day, when I got a Facebook message from Andy Shernoff — the guy who called the shots on Go Girl Crazy! — thanking me for the post. What the what?

Look, I know how many people read these — and it’s not a lot (nor the point) — so I know how weird it is that the guy who wrote and sang the song was among that very small number. But it happened, and when I told him I was writing about “Two Tub Man,” he was gracious enough to offer some backstory . . .

“Two Tub Man” was the first song that Andy Shernoff wrote. And it was a pretty auspicious start, because it’s an absolute raver about “the punkiest kid ever … using Who style power chords” So, in the spirit of “Anyway Anyhow Anywhere,” it kicks off with:

While Shernoff and Handsome Dick Manitoba are laying down the vocals, guitarist Ross “The Boss” Funichello is tossing his insanely quick guitar licks in, over and around every line. There’s no guitar solo, per se, but add it all up, and there’s enough lead guitar for a dozen solos.

The Who influence really kicks in on the chorus, where the tempo slows down and over power chords as big as anything Pete Townshend ever played, they sing:

I can go anywhere, people look and people stare
They all know that I’m the one
Not to let your son become
What I want to do, I do
Who I want to screw, I screwwwww
Playin’ in a heavy band, guess I’m just . . .

Like the best Dictators songs, “Two Tub Man” walks the line between the ridiculous and the hilarious. With all of the crazy guitar and interjections like “ITS FEEDING TIME” in the middle of the chorus, it’s best to take all of the boasting as coming from a guy who is hoping that people take him seriously enough to leave him alone but not so seriously that they want to challenge him on it.

One thing I found out after all these years: “Two Tub Man” is a piece of original slang that Shernoff made up because it “fit the character in the song.” It’s obvious, of course, that a “two tub man” is a complete badass, but I never knew if it was some regional thing that hadn’t ever made it to my neck of the world. Nope.

Oh, and one more thing: apparently Go Girl Crazy! is being reissued this fall in honor of its 40th anniversary, so if you’ve previously missed, here’s your chance!