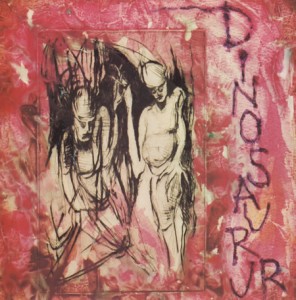 Poor J Mascis. Born too late to ever be part of the pantheon of guitar heroes, doomed to be putting long, noisy solos into songs for a target audience that frowns upon that sort of thing.

Hurrah for J Mascis! One of the last of the guitar heroes, keeping the flame of the long noisy guitar solo long after everybody else gave it up.

“Freak Scene” was the first time I really noticed Dinosaur Jr., as there were a lot of 1980s groups making atonal noise like Dinosaur Jr. did on their first couple of records, and as long as Hüsker Dü and The Jesus and Mary Chain were wedding their atonal noise with pure pop bliss, I really didn’t need anything else.

Enter “Freak Scene,” where J Mascis cleaned up his production, cleaned up his melodic lines and found an instantly catchy riff, to boot. At the same time, he left the guitars noisy as all fuck and repeated the first verse twice — the second time quieter than the first — to make sure we were paying attention:

Seen enough to eye you
But I’ve seen to much to try you
It’s always weirdness while you
Dig it much too much to fry you
The weirdness flows between us
Anyone can tell to see us
Freak scene just can’t believe us
Why can’t it just be cool and free us?

And when he got our attention, it was time for a guitar solo that was so overdriven it ends up smashing into the guardrails, temporarily halting the song until Mascis climbed out of the wreckage and let us know exactly why he crashed in the first place:

Sometimes I don’t thrill you
Sometimes I think I’ll kill you
Just don’t let me fuck up will you?
’cause when I need a friend it’s still you

And this sets the stage for the second guitar solo — still one of the most brilliant of the 1980s — with echoes of the guitar solo in “Celebrated Summer” and the mandolin solo in “Maggie May,” and yet sounding light-years from either of those.

It was a whole new thing: not really punk rock, per se, as even the faster songs seemed non-punky, and certainly not part of that whole grunge thing happening, as his voice and sound were closer to Neil Young than to metal. It was a third way, pitched in between the noise-rockers and the pure-poppers, and for those of us still mourning the break-up of the Hüskers, a song like “Freak Scene” was like J Mascis throwing his hat into the ring.