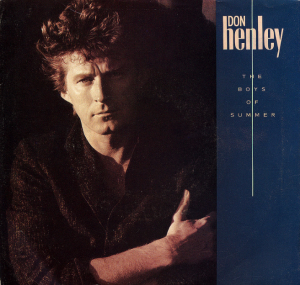 Except that it isn’t. Cos I don’t believe in guilty pleasures anymore. Why? Almost by definition, a “guilty pleasure” means that you’re worried about what other people think about something you love. Fuck that. I love this song, and I always have. And I just don’t care anymore what y’all think about that.

Yes, I know that it’s based upon a goddamned synth riff and utilizes fucking drum machines and — by the way — is sung by Don Fucking Henley, and I don’t care. Why? Well, for one thing, Mike Campbell. Back in the mid-1980s, Campbell and Benmont Tench were basically the greatest guest artists you could have on your record, coming up with hooks and riffs that they didn’t come up with for Tom Petty because Petty only wrote so many songs and they had a zillion more ideas than that.

For coming up with an insanely human guitar part in the midst of all of the artificiality, Mike Campbell deserves a “Guest Guitarist Grammy” or some bullshit like that. The sparse leads, like lightning crackling just out of your peripheral vision; bits he plays just before each verse — especially that weird muffled low-register build-up before the “Out on the road today / I saw a Deadhead sticker on a Cadillac” — are sublime.

And, of course, there is that whole “Deadhead sticker on a Cadillac” line, which like everything else about this song is equal parts beautiful and awful. On one one hand, not the worst symbol of the “hippies becoming yuppies” phenomenon — you know, Don Henley’s natural audience — that helped define the 1980s, and, as such, a helluva image. (And kudos to The Ataris to changing “Deadhead” to “Black Flag” in their readymade punk rock update two decades later.)

Not that any of it matters, not against that relentlessly descending synth, Magic Mike Campbell’s guitar licks, Henley’s soaring chorus and the utterly relatable words about trying to convince the person you think is your life-long love to ignore what you’re sure is a temporary infatuation. It’s all as irresistible as the titular boys are to the narrator’s love object.