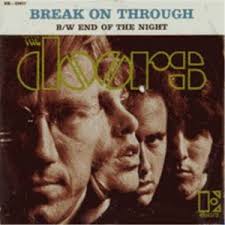 Like a lot of folks my age, I went through a Doors phase around the time of No One Here Gets Out Alive, buying all of their albums in a two-month period near the end of 1980 — five of them in November — and yet, by the time that Rolling Stone came out with their infamous “He’s Hot, He’s Sexy and He’s Dead” cover a year later, I was already pretty much over the whole thing.

So when I lent someone at my work my entire Doors collection in exchange for three early Kinks albums — Kinks-Size, Kinks Kingdom and Kinda Kinks, so not even particularly good early Kinks albums — and neither of us ever bothered to mention trading them back, I felt like I’d won.

Part of it is that I think I just got sick of the cult of Jim Morrison, which caused me to underrate a band who had a great sound — Morrison’s voice on top of the noise the Ray Manzarek, Robbie Kreiger & John Densmore was a unique thing in this world — but who could never figure out how to balance their arty pretensions with their pop sensibilities.

Over the years, when I was feeling uncharitable towards what I considered the overrating of The Doors, I called them the “Saturday morning cartoon version of The Velvet Underground,” who were, of course, balancing those two things perfectly at exactly the same time.

At some point over the last decade or so, I’ve come around: The Doors made one great album (their first, duh) and a bunch of good-to-great singles, the best of which is their first, “Break on Through (To The Other Side),” probably the most energetic song in their whole catalog. For a band to lead off their career with their most rockingest song isn’t that weird — I just wrote about it with the Died Pretty — but “Break On Through (To The Other Side)” suggests a garage-rock path not taken.

Led by Densmore’s chattering drums and Krieger’s piercing distorto guitar on the chorus, for a second “Break on Through (To The Other Side)” actually feels like it’s gonna do what the title suggests, and you can feel the bricks between realities falling with every single note of Manzarek’s organ solo. But then they’re pulled back by Morrison, who has realized that if he actually goes to the other side, somebody else is going to get high with (and presumably, fuck) his baby.

Originally, the phrase “she gets high” was censored into “she gets” by Elektra, and while I understand why it was restored after people realized that “high” wasn’t exactly one of the seven dirty words, I also kinda miss the mystery of:

When Jim Morrison resolved that original, censored, version with a wordless scream, what she got was full of infinite possibilities: for all we knew, she was already on the other side, waiting for us to arrive on a wave of keyboards and distorted guitars.

Promo video for “Break on Through (To The Other Side)”