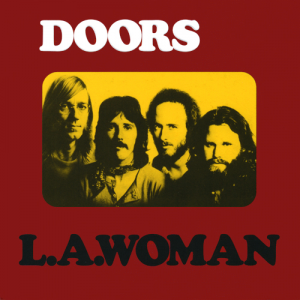 What a difference four years makes! While a lot of big bands these days — ::cough:: Arcade Fire ::cough:: routinely take 3-4 years between albums, The Doors’ entire career happened in that timespan.

All of that drama — stardom, fuck-ups, fatness, rock bottoms, dick flashes, redemption and tons and tons of waking up this morning and getting themselves a beer — happened in less time than it took to make Oliver Stone’s film about all of that drama.

Also: none of drama is reflected in “L.A. Woman,” which is a driving song that reflects the patience you get when you know a traffic jam is around any bend. That’s what I like about “L.A. Woman” — the patience. The feel that they’re all laying back a bit, waiting like four cars who have hit a stop sign at the same time and nobody wants to be the first to go.

So then end up leaving wide open spaces in the song, and consequently you never know what’s gonna happen next: a cool snare beat; a funky guitar lick; a piano flourish that sound like the riff of “You Really Got Me”; an anagram of the lead singer’s name which was probably also a dick joke.

It was all up for grabs in “L.A. Woman,” maybe reflecting the endless possibilities of life in Los Angeles, or maybe reflecting the fact that they were all fucking exhausted by those endless possibilities and just kinda wanted to strip everything away. It also feels like a reflection of growth, signified by the fact that the song is “L.A. Woman,” when four years previously, it would have been “L.A. Girl.”

What’s left is a song that is an absolute joy, an off-brand romp that stands as the most exuberant song in The Doors’ catalog. “L.A. Woman” is bursting with life than even when Morrison directs “let’s change the mood from glad to sadness,” the song resists and ends up building right back up to where it started.