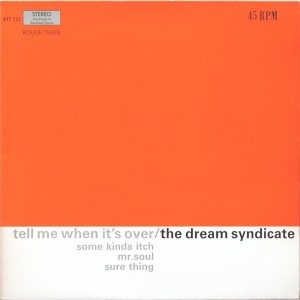 But the key to “Tell Me When It’s Over” — the kick-off track to an album that I love beyond all measure — is one of the great rhythm guitar parts in history. With every scrape of his fingers against the strings, it’s like he’s peeling another layer from his very soul and holding it aloft for the world to see.

Of course, you’ve had to listen to “Tell Me When It’s Over” as many damn times as I have in the the past 30 some-odd years to even notice, because everything else about it is so ridiculously great.

Take Dennis Duck’s drum part. His snare — sounding like the first shot in the last war — is what kicks the song off, and his drums drive the chorus:

Or take Steve Wynn’s singing. He’s not so much doing Lou Reed as inhabiting Lou Reed, and his “yeahhhhhhhhs” and “aaaahhhhhhhhs” sound like he’s going out and re-gathering the bits of his soul his guitar has already peeled off, and when he croaks “Ahhhhhh, you gotta real imagination, mannnnnnn!” in the third verse, it’s like the world is coming to an end.