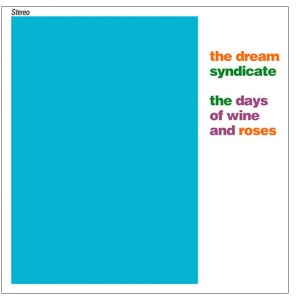 “Tell Me When It’s Over” was the single. “Halloween” was the one that everybody covered. The title track was the one that shamelessly stole from “Tombstone Blues,” but my favorite song from The Days of Wine and Roses is “Then She Remembers”.

Hell, it’s practically my favorite song of the 1980s, if not ever.

Not for the words, which I’ve never actually known outside of the chorus — Steve Wynn screams them in such a way that I had no idea they were about an abuse survivor until I looked the lyrics up on the internet for this post — but for the ungodly exquisite noise The Dream Syndicate makes throughout.

From the moment “Then She Remembers” starts with yet another Dennis Duck snare blast, Karl Precoda is on fucking fire. His unhinged leads before Steve Wynn even opens is mouth are like transmissions from the the other side of the sun, and throughout the first half of the song, he’s matching what I’ve always called “Steve Wynn’s psychotic voice” neurosis for neurosis, while every once in a while Dennis Duck’s double-times an already fast song for extra momentum.

It’s all on the verge of falling apart at every single juncture, only to coalesce together in the first chorus — a preview of the terrible beauty to come — as they all suddenly coalesce as Steve Wynn sings “Then she remembers / what she said” before nearly falling apart again.

There’s another verses, but Precoda is so out in front of everybody he takes another crazed solo between the second verse and the he second chorus.

And at the end of that second chorus, “Then She Remembers” hits escape velocity. Not through speed, but rather through noise and beauty.

Precoda plays a “what-the-hell-was-that?” chord and just kinda holds it while the entire song swirls around him, getting ready to get sucked into the vortex and just vanish from entire universe. At the last possible second, he starts playing the guitar figure from the chorus instead, a supersonic Peter Buck riff that eternally twists away from itself, and instead of getting sucked into nothingness, “Then She Remembers” starts moving towards infinity.

And Steve Wynn provides the countdown:

“Then she remembers what she said”

“Then she remembers what she said”

“Then, she remembers what she saaaiiidd”

“Then she remembers, what she saaaaaid, then”

“She remembers what she saaaaaid”

“Then sheeeeeee remembers what she said”

“Then she reeeee members, ooooooooh”

“THEN
SHE
REMEMBERS
WHAT
SHE
SAID!”

And with that, Wynn is swallowed whole by the momentum that The Dream Syndicate have built up, enough to not just leave orbit, but leave every other band on Earth behind, as well. I do not know how many times I put this on while a DJ at KFSR and turned the studio monitors all the way up. My guess is: all the times.

Of course, there’s no way for “Then She Remembers” to end, so instead of fading out, it just gets further and further away until we can’t hear it anymore.