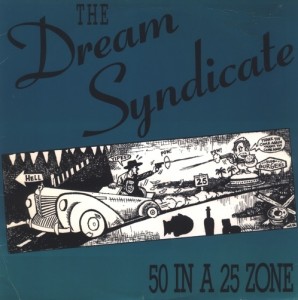 No one tried harder to like Medicine Show, the 1984 follow-up to The Days of Wine and Roses, than I did. While it now makes perfect sense in the context of the music that Steve Wynn has made for the rest of his career, in 1984, it felt like an abandonment of core principles.

And even now, the hollowness of both the production and the songs overshadows everything else. With Precoda gone — and Wynn doing great work with his pals in Danny and Dusty, I barely paid any attention to 1987’s Out of The Grey when it first came out.

That is, until I encountered “Drinking Problem,” one of the b-sides of the “50 in 25 Zone” single. While it felt more like The Lost Weekend than The Days of Wine and Roses, I’d be a fool not to love a song that starts off with:

With a riff that’s a cousin of “Poor Poor Pitiful Me” and a singalong chorus, “Drinking Problem” was perhaps the most joyful song about an alcoholic fuck-up I’d ever heard.

In the end — after Paul B. Cutler plays a nice winding solo, the rest of the guys start chiming in with the call-and-response vocals of “No one around,” as Wynn describes his buddy (or “buddy,” as the case may have been) getting deeper and deeper in the shit.


I’m not even gonna lie: that joyous “ONE MORE ROUND!” just kills me every time.