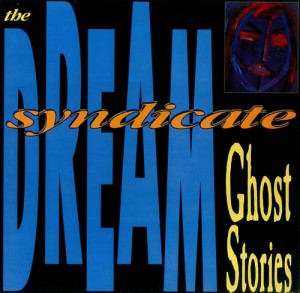 While I had — and still have — no use for Medicine Show and Out of the Grey, I was happily surprised when The Dream Syndicate put out their 1988 swan song, Ghost Stories.

While it was basically yet another straight-ahead rock album (something Wynn has pretty much done for the rest of his career, with enough success that I still look forward to every release with his name on it), Ghost Stories had both a better sound and better songs than its immediate predecessors.

Secondly, most of the songs on Ghost Stories were dark and despairing lyrically, which perfectly fit my mood during much of 1988, which was a weird transitional year for me, and so an upbeat rock album with downbeat words was perfect.

So while Paul B. Cutler was tossing out a near-psychedelic curlicue guitar hook throughout, Steve Wynn was singing about his feelings following a failed relationship:

Hey, I was sad because of a failed relationship, too! And I wore black, too! Though not because of the failed relationships, and certainly not during the smog-choked Fresno summer daytimes, cos that’s basically like inviting the sun to kill you on the spot. But after the sun went down, the black pocket-t shirt went on. So I guess that counts.

So on top of the sadness and the nod to bohemian dressing, there were tons and tons of cool-sounding guitars, especially on the solo, where Wynn joined in, so it was actually closer to The Church than anything else.

In any event, by the time the year got better, Ghost Stories was already entrenched in my heart, and was probably the reason that Steve Wynn is a guy I’ll pay attention to for the rest of our lives.