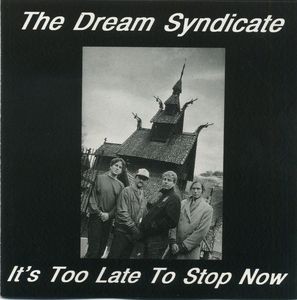 I wish I knew where I found It’s Too Late To Stop Now. Was it at Ragin’? Or Amoeba in Berkeley? Or some record store in L.A.? All I know for sure was that it’s this weird compilation of demos, outtakes, radio performances and guys with tape recorders recording shows.

So a bootleg. Except that I seem to remember reading that it was a fan club record, or some other nudge nudge wink wink “hey, this is kinda legit.” I do know this: it’s probably the best Dream Syndicate album that isn’t The Days of Wine and Roses.

It’s a bounty of treasure: the original demos of “Slide Away” and “John Coltrane Stereo Blues.” The utterly sublime “If You Should Ever Need a Fool,” a version of “Whatever You Please” featuring a recorder, Steve Wynn doing “Listen to The Lion” seguing into “Tell Me When It’s Over” that Cindy sent me a picture of in 1987, and “Closer,” a candidate for Prettiest Song Ever Recorded, Indie Division.

While he recorded it as a solo album a few years later, I truly did this radio performance, which is just Steve Wynn and an acoustic guitar, trying to console someone who might just be beyond consolation.

Are you still telling people you’re better off dead?
Well, I don’t know what to say, that hasn’t already been said
You say you’re beaten and I don’t doubt it
Why do you still want to talk about it?

What isn’t in doubt is the chorus, which Wynn sings is a quivering voice:

At the end of his performance, one of his bandmates teases him, saying “that’s the goddammed prettiest song I’ve ever heard” in a mocking way. But he isn’t far off the mark.