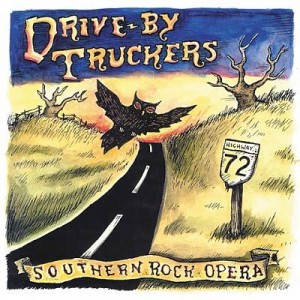 Had Southern Rock Opera been released a couple of decades earlier, “Life in the Factory” would have been the song that kicked off side four. And like, oh, I dunno, Quadrophenia, it uses that exalted spot to be a fractal of the entire album.

So like “Dr. Jimmy” or Zen Arcade’s “Turn on The News” “Life in the Factory” pretty much states the entire musical and lyrical theme of Southern Rock Opera in a single song.

As a song, it just totally fucking rocks on every fucking level. Which I know isn’t much of an observation, but “Life in The Factory” is based upon chord changes that are at once familiar and new. And three guitars ring out in both unison and against each other, Patterson Hood tells us a story.

And so it goes: they practiced long enough and hard enough to be able to kick ass opening for The Rolling Stones and The Who, playing 300 shows a year — a complete grind — in order to escape what would have been their predicted path.

Of course, noone ever asked if living life in the music business was its own kind of factory life. I wonder what the guys who make up whichever incarnation of Lynyrd Skynyrd is touring right this second think about trading one factory for another.

And I wonder if Johnny Van Zant asks “What song is it you want to hear?” every night before they launch into “Free Bird.”

Guessing that they’re fine. Even if the magic part ended nearly 40 years ago.

The guitars got quiet for that last verse, but as they inevitably swell up again — without even a solo — you have some time to reflect upon the myth-making that Hood is indulging in here.

As a guy who bought One More From The Road in 1977 and played the living fuck out of it — and you can bet your ass I’m unironically writing about “Free Bird” when I get there in the next couple of years — not only will I allow the myth-making, I’ll encourage it.

Because things are about to go terribly wrong.

“Life in the Factory”