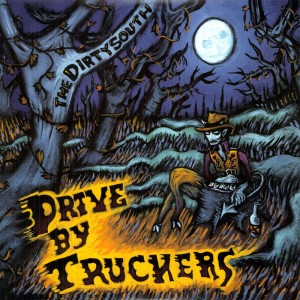 “Carl Perkins Cadillac” is studded with great lines throughout, starting with “Life ain’t nothing but a blendin’ up of all the ups and downs” and this amazing couplet:

I got friends in Nashville, or at least they’re folks I know
Nashville is where you go to see if what they said is so

A lot of the songs on The Dirty South, are hard rockers that either zoom or lumber, but still absolutely fill every inch of the road. In contrast, “Carl Perkins’ Cadillac” glides down the road with the cruise control clearly engaged, never even bothering to change lanes .

Which is all the better to hear verses (or maybe it’s the chorus):

Mr. Phillips was the only man Jerry Lee still would call sir
Then I guess Mr. Phillips did all of y’all about as good as you deserve
He did just what he said he’s gonna do and the money came in sacks
New contracts and Carl Perkins’ Cadillac

Of course, things changed. As a matter of fact, they already had: the guy in the song is addressing Elvis from some point in the future, looking back at that era with a combination and wistfulness and jaundice. Like he couldn’t believe that it happened and he couldn’t imagine life without it happening.