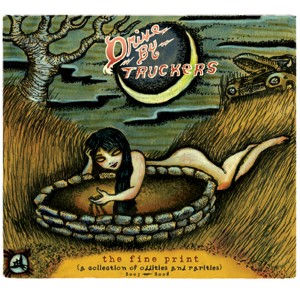 Album: The Fine Print: A Collection of Oddities and Rarities
Year: 2004

Recorded in 2004 for a tribute album that never got released, Drive-by Truckers cover of Tom T. Hall’s “Mama Bake a Pie (Daddy Kill a Chicken)” is one of those rare times a band takes a 40-year-old song and makes it feel like it was written yesterday.

Which, given the subject matter — a paralyzed vet coming home for the first time — kinda sucks. Tom T. Hall wrote it about a Vietnam vet, but of course it still has resonance now for our vets coming home from Iraq or Afghanistan. And will sadly have resonance for whichever of the endless series of wars we find ourselves in next.

On the Drive-by Truckers version — straight ahead country, with a straight-forward beat and steel guitar licks echoing nearly every line — Patterson Hood sings at the highest end of his register and locates deep pathos in the melody as he channel’s Hall’s veteran channeling some false bravado as he anticipates an upcoming encounter.

The bottle hidden underneath the blanket over my two battered legs
I can see the stewardess make over me and ask “Were you afraid?”
I’ll say, “Why no I’m Superman, and couldn’t find the phone booth quite in time.”
A GI gets a lot of laughs if he remembers all the funny lines

But as he continues to imaging what’s going to happen — his mom’s tears, his dad’s questions, his uncle’s observations — he really only has one person on his mind, and only one solution for dealing with it.

I know she’ll come and see me but I bet she never once looks at my legs
Naw, she’ll talk about the weather and the dress she wore the July 4th parade
Lord, I love her and I don’t believe this bottle’s gonna get her off my mind
I see here in the paper, where they say the war is just a waste of time

This is just heartbreaking, of course, and whether or not the war is a waste of time from a geopolitical standpoint is beyond the scope of the song. But from the standpoint of the guy in the song, the war wasn’t just a waste of time, it completely fucked up his life.

Which is why it’s such a devastating anti-war song. It’s not quite as tear-jerking as the Pogues cover of “And The Band Played Waltzing Maltida,” but it’s pretty damn close.

“Mama Bake a Pie (Daddy Kill a Chicken)” wasn’t the first Tom T. Hall song that Patterson Hood has covered, which isn’t surprising since they both share a penchant for storytelling in their songs. And considering the greatness of Hood’s first Hall cover — “Pay No Attention to Alice” from his first solo album, Killers and Stars — I’d love for this to do a whole album of this stuff.