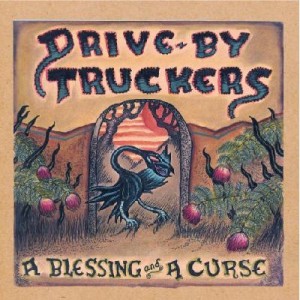 With drummer Brad Morgan double-timing like Charlie Watts in “Live With Me,” “Feb 14” feels as loose and sloppy as the Truckers ever got, almost like Morgan started the beat and they all kinda join in, looking at each other until Patterson Hood “1,2,3, 4s” them into the first verse.

Flowers flying ‘cross the room
Vases smashed against the floor
Said, “I’d rather be alone
Take your chocolates and go home”

Hmm. Not likely, though I guess you can’t blame a guy for trying. No matter how much the hook on the chorus immediately sticks in your head.

In the end, after Hood pleads at the top of his range for a couple more verses, there’s a trumpet solo, buried in the mix. It’s all very spontaneous feeling, like if they’d given too much thought to it, it would have come out completely differently. As Ranjit pointed out, it’s very Replacements-y, which is probably why I love it so much.