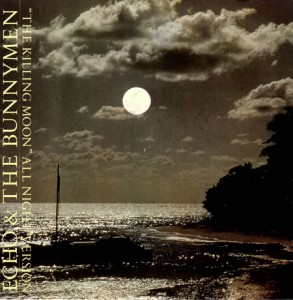 I do know that when I did my original Daily Collegian review of Ocean Rain I basically acknowledged how hard it was for me to get a grasp on it:

Certainly, the two best songs work like that: “The Killing Moon” seemed understated at first, like I was listening to it from a distance — but the epic feel won me over.

Anyways, “The Killing Moon.” Mostly acoustic, with Will Sergeant going to the electric mostly for effect, with the heavy musical lifting on the chorus done mostly by the string section, and of course Ian McCullough, who has never sounded more epic than when he intones:

It’s the space after he sings “Fate” of course. Right? Entire universes seem to pass before he sings “Up against your will.”

And no matter how many times he repeats that chorus, he never once rushes it. Why would he? He’s got all night.

So by the time Sergeant comes in with the baroque guitar lead at the end, also unhurried — he’s got nothing but time, either — the whole song just shakes with the tension of the awesome amount of restraint they are showing.

On the 12″ nine-minute “All Night Version” it’s almost a completely different arrangement: it starts with the chorus, breaks completely down halfway through and ends with a massive amount of backwards guitars and violins, but Sergeant’s slowly-picked solo is so on-point in both versions that even McCullough has no other choice to “La-la-la” along with it as the whole song slowly sinks under the horizon, getting larger and larger until it finally disappears.

Maybe it was Pavement’s 1997 cover that sealed “The Killing Moon” for me: playing it as a straight-ahead rock song, and slowing it down in the process, Steve Malkmus somehow found newly hidden beauty in the chorus.

It’s to write about songs like “The Killing Moon” that I started this project in the first place.

Official video for “The Killing Moon”

“The Killing Moon (All Night Version)”