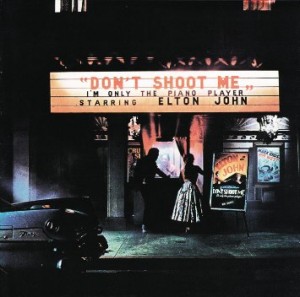 We lived about a mile away, and since I was already riding my bike everywhere — including on a daily basis to Robinson Elementary (even though we technically lived in the Wolters district, Robinson was where the MGM program was) — I know that I bought quite a few of my first singles at Rudy’s, which had a big display rack of the latest music.

So when I discovered that the song I thought was called “Clouds in My Eye” was actually called “Daniel,” I went and spent — let’s say 49 cents of — my allowance to buy it.

And, of course, listen to it over and over and over, and wondering if the lyrics about the older brother and Spain and the clouds in his eye made any sense or not.

Of course, “Daniel” has both a really cheesy-sounding electric piano, and an even cheesier-sounding synth hook, but, of course, Elton was utterly killing it melodically, so it remains impossible to get the chorus out of my head all these years later:

At some point soon after that, I bought my first album, which was Don’t Shoot Me, I’m Only The Piano Player, and didn’t enjoy it as much as I thought I might.

While I really liked “Teacher, I Need You” & “Elderberry Wine” and my mom pointed out “Crocodile Rock” reminded her of a 1950s song with her name, but some of the other songs left me cold, so I don’t really have memories of listening to it a whole hell of a lot.

Though, I must have, right?