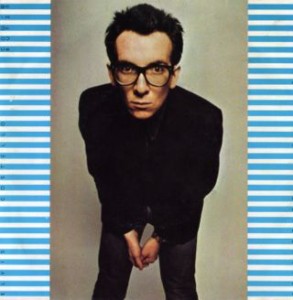 While the rest of the world regards My Aim is True as a stellar debut album, to me, it’s really just a warm-up for the glories to come. Even the rockers sound a bit thin to me.

That said, while it’s not on the U.K. version of My Aim Is True, “Watching The Detectives” seems like the first time that Elvis Costello broke free of the “wow, I’m recording an album here” mode and stumbled into something darker and heavier.

And we can thank Steve Nieve for that.

In his recent autobiography, Unfaithful Music and Disappearing Ink, Elvis reveals (though I guess he probably revealed it sooner) that “Watching The Detectives” was the first of his songs that Nieve played on, and his eerie keyboard fills are an instant difference-maker.

Those keyboard fills contribute the the almost unbelievable amount of tension dominating “Watching The Detectives.” You get the impression that Elvis wasn’t really setting out to do a reggae song so much as he realized reggae was the only music that had the spaces he needed to tell his story.

With Costello’s film-noir lead guitar nervously careening down flickering light hallways where every door hides a different secret, “Watching The Detectives” builds an unbearable amount of suspense until Costello himself snaps, just throwing line after line in a mad jumble:

You think you’re alone until you realize you’re in it
Now fear is here to stay, love is here for a visit
They call it instant justice when it’s past the legal limit
Someone’s scratching at the window, I wonder who is it?
The detectives come to check if you belong to the parents
Who are ready to hear the worst about their daughter’s disappearance
Though it nearly took a miracle to get you to stay
It only took my little fingers to blow you away

And of course, the entire song comes to a stop for that last line. And suddenly the chorus that follows isn’t so much describing an annoyance as it is describing a motive.

Live, that verse always comes after an extended noise-break. The one time I saw Elvis — September 16, 1989 at the Concord Pavilion (thank you internet!) — he had Tom Waits’ guitarist, Marc Ribot in tow, and Ribot just destroyed the entire place during “Watching The Detectives.” Guitar shards were flying everywhere. Nikki & I barely got out alive.

Oh, and if you haven’t seen this Rockpalast version with the Attractions from 1978, stop everything you’re doing and play it.