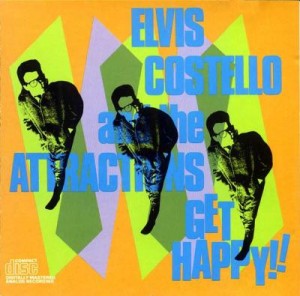 So I have two kinds of favorite albums, one of which is easy for a project like this, and the other that isn’t. While “Certain Songs” is song-oriented (duh), I soon realized that it was also a way to highlight my favorite albums.

For example, by posting four songs from This Year’s Model, I was also implying just how much I love it (#17 on my list of favorite albums from the 1970s), but when it comes to Get Happy!! things aren’t so easy.

Like I mentioned up top, I think I have two different types of “favorite albums.” The first is album with a few titanic classics and a bunch of good songs that eventually get uplifted by the classics surrounding them. Like This Years Model, Let it Be or Boys and Girls in America. The other — and admittedly rarer — is a record where nearly every song is excellent, but none really stand out as titanic classics. Or maybe one.

Like More Songs About Buildings and Food or Brotherhood or Get Happy!!. So it was hard to pick a couple of songs out of a batch of songs that have been floating my head for decades.

Out of all of the half-dozen great albums that Elvis made with The Attractions, Get Happy!! is the one where they really play down their instrumental virtuosity, which I think is part of the issue that a lot of people have with it.

So with apologies to “Love For Tender” and “Opportunity” or “Beaten to The Punch” I’m going to go with “New Amsterdam,” which is atypical of a record that is full of speedy, punchy soul songs, but has an absolutely memorable chorus:

Like most of the songs on Get Happy!! “New Amsterdam” establishes its groove — in this case a slightly-too-fast waltz time — says what it needs to say, and gets the hell out of its own way. I’m not really sure what Elvis is on about with that whole “double dutch” thing, but it sounds cool.