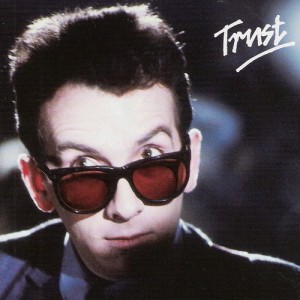 Coming in between the genre exercises of Get Happy!! and Almost Blue (not to mention the 20 song odds and sods Taking Liberties), even at the time Trust seemed to be a victim of Costello’s almost unprecedented prolificness.

It was all too much to digest. Of course, with the benefit of 35 years, it’s clear that Trust is one of his most consistently excellent albums, and and is weirdly underrated because its basically the only album of his early period not to have a musical framing device.

Instead, Trust was full of soul, reggae & jazz grooves, rocking duets, big chorused pop songs and not one but two songs with big syncopated Diddleyesque drumbeats, the second of which — “Strict Time” — is easily my favorite song on the album.

It’s so joyous sounding! From the first chicken-scratch guitar through the last joke of “More like a hand job than the hand jive”, “Strict Time” is just pure pleasure. Especially the chorus, which features Elvis yelling with himself:

Toughen up, toughen up!
Keep your lip buttoned up!
Strict time

at the same time he’s drawling “striiiiiiiict tiiiimmme” over and over again.

It’s not a major song by any stretch of the imagination, and yet it’s the one that originally got me into Trust in the first place.