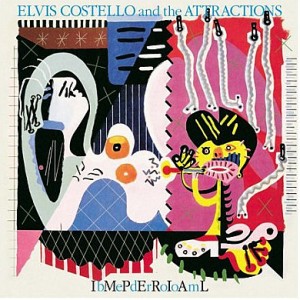 Still, if I thought that a lot of the arrangements were fussy and overcluttered, the songs that did break through to me are among my favorites he ever released. Like the nearly unstoppable “Beyond Belief,” which for a couple of dazzling minutes answers the “Masterpiece?” question with a resounding “yes!”

“Beyond Belief” starts quietly, with Pete Thomas’ hungover drums and Bruce Thomas walking-up-to-the-bar bass burbling underneath Elvis as he uses every one of his voices to sing nearly line:

It’s all tension with no release in sight as Steve Nieve starts swirling around the music while Elvis references his old producer’s one big hit — asking “Do you have to be so cruel to be callous?” and not even bothering for an answer when suddenly, beamed directly from outer space, yet another Elvis breaks into the song:

But as fast as outer space Elvis shows up, he’s gone, and “Beyond Belief” is back to endlessly circling around itself. But now, it’s been broken, it’s been derailed, and you know that whatever’s coming next, it’s gonna change the course of the song once and for all.

And sure enough, not coming from outer space, but clearly heading there, “Beyond Belief” finally hits something even remotely recognizable as a chorus. But, of course, it’s really a coda:

But it’s already fading. It’s getting away! Come back, you stupid coda! You were just getting to be even remotely normal and understandable, and now you’re leaving!

That right there folks, is how you open your most ambitious album to date: with a ground-breaking song that is ever-changing, unknowable and yet completely within your idiom.

“Beyond Belief” performed live in 1983