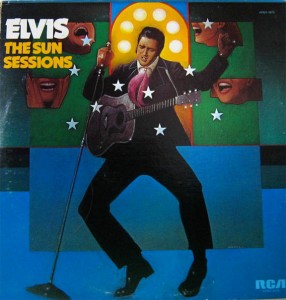 So, the other Elvis. Now that I’ve softened my agree-with-Chuck-D stance that he never meant shit to me, I can also hear his peculiar, world-shifting genius.

But because I’ve never gone through any period in my life where I dug deep into his career, I just don’t have that much to say about Elvis Presley.

What I like about a song like “Mystery Train” or some of the other Sun Sessions songs is that there isn’t yet any guile in the music. Maybe Mr. Phillips knows that this is about to inflame an entire generation of teenagers, but Elvis sure as hell doesn’t.

So this is the only time that Elvis Presley is ever going to make music without the weight of being “Elvis Presley” pressing him down and governing his every move. And the resultant music — not just “Mystery Train,” but “Good Rocking Tonight,” or “Baby, Let’s Play House” or “That’s All Right Mama” — sounds so light and free that it has to be tethered to the earth.

Which has got to be part of what people responded to in the first place — these performances that seemed to come from nowhere and felt like they could end up anywhere.