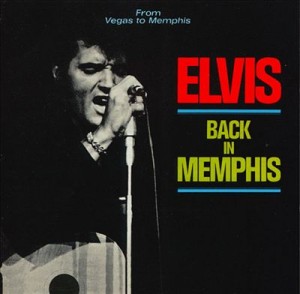 It goes to show just how different the world was in the late 1960s that Elvis Presley recorded his “comeback” music at the ripe old age of 34.

But that’s what it was when he stepped into a studio in Memphis and recorded a bunch of songs that felt raw and vital for the first time in over a decade.

Those Memphis sessions yielded huge hits like “In The Ghetto” and “Suspicious Minds,” as well as lesser known songs like the barn-burning “Stranger in My Own Hometown,” which starts off with a deep soul groove, and doesn’t let up for a second as Elvis sings:

My so-called friends stopped being friendly
Oh, but you can’t keep a good man down
No, can’t get him down


With a guitar that sounds like somebody tuned a dobro to sound like a sitar, perfectly-executed horn lines, strings swooping in and out and a harmonica blaring in the wind, “Stranger in My Own Hometown” sounds like Elvis was trying to take every musical development of the 1960s — or at least folk-rock, pyschedelica and soul — and create a whole new thing all over again.

It’s nearly all too much — in fact it probably is too much, as the density approaches Paul’s Boutique levels near the end — but a whole album of music that sounded like this would have been utterly fabulous.

“Stranger in My Own Hometown”