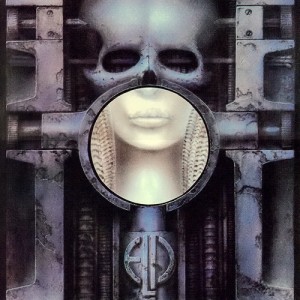 How bad was it? I went to Penny Candy and bought a shiny “ELP” best buckle. And then was pissed when more than one person said “Cool. I like ELO, too.”

As it turned out (as it usually turns out with hyphenate-rock), I liked the rock parts of prog-rock and not so much the prog parts.

And, of course, I really liked the sound of Keith Emerson’s Hammond, which was nearly as primal as Jon Lord’s, but he had way more cool licks than Jon Lord, so the first part of “Karn Evil 9, 1st Impression” was chock full of primal organ riffs and cool little runs.

And of course, the whole chorus was an actual pop hook.

Roll up
Roll up
See the show!!

Welcome back my friends
To the show that never ends
We’re so glad you could attend
Come inside, come inside!

But what I liked was the utterly terrific keyboard solo that Keith Emerson destroys with about halfway through the song. Say what you want about ELP and prog rock and wankery in general, but that keyboard solo just fucking burns!

Oh, and I’m not able to verify this, so let’s just say that I have a memory of my friend Craig owning the 8-track of Brain Salad Surgery and me being kinda pissed that the synth transition between Karn Evil 9, 1st Impression (Part 1)” and “Karn Evil 9, 1st Impression (Part 2)” faded out and then faded back in, just like the vinyl when it should have been a smooth transition between tracks.

Cos those were the things that bothered me back then.

Also: on August 5, 1977, the aforementioned Craig and I went to Selland Arena in Fresno to see Emerson, Lake and Palmer in concert. Weirdly enough, that gig doesn’t actually show up in any of their online concert chronologies, but somebody posted a freakin’ video of them playing “Tarkus” from that show on YouTube, and somebody else is selling an unused ticket from the show on Amazon, so stuff it, other online folks!

I only really remember two things about that concert: Keith Emerson had a portable keyboard that shot sparks, and the opening band was a jazz-rock offshoot from Santana called Journey, whose “brand new lead singer” I hated instantly and forever.