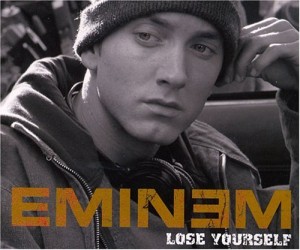 I was in my late 30s when Marshall Mathers became the biggest thing in the pop universe. His talent was undeniable, his singles were inescapable, but for the most part, I admired Eminem as a phenomenom more than I enjoyed him as an artist.

I think it had more to do with his subject matter than anything else.

On one hand, never in a million years am I going to get up in arms because an artist tackles a forbidden subject or uses forbidden words or anything else. Provocation is one of the purposes of art, and censorship is bullshit. So Marshall Mathers was 100% free to pen his misogynist, homophobic lyrics, and I wasn’t going to condemn him for them.

On the other hand, that didn’t mean I had to enjoy them either. And I’m sure that it was all about getting older: I mean, it sure as shit didn’t bother me when the Ice-T or Axl Rose — to pick two examples — wrote about many of the same things a decade earlier.

So, it’s clearly about me getting older.

In any event, it’s good to know that when he applied all of his lyrical and musical density to a song about his art and the meaning of that art to his life, it produced a stone cold classic.

You better lose yourself in the music, the moment
You own it, you better never let it go (go)
You only get one shot, do not miss your chance to blow
This opportunity comes once in a lifetime (yo)

That chorus “Lose Yourself” is an absolute wonder, with Eminem somehow ahead of and behind the guitar/drum riff syncopation at the same time, clearly invoking that moment where everything is going to change no matter how it turns out.

And how much it matters to him that it turn out the way he wants it to.

Official video for “Lose Yourself”