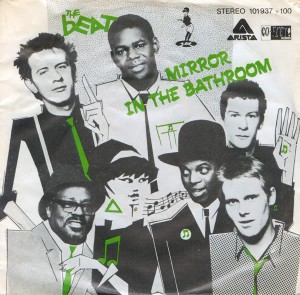 I was a couple of years late getting I Just Can’t Stop It into my life. While it came out in 1980, I didn’t get around to buying it until mid-October 1982.

Since that time, I’ve never stopped listening to it, as its utterly infectious combination of reggae and punk and pop felt completely fresh in 1982 and still resonates today.

And it all happens within the first 30 seconds. Kicking off with an Everett Morton drumroll that instantly gets subsumed into David Steele’s churning bass, Saxa’s sneaking sax and the airy guitars of Dave Wakeling and Andy Cox, “Mirror in The Bathroom” in tunneling inside your head even before Dave Wakeling opens his mouth to sing.

It’s as energetic as any punk song of the era, yet totally light on its feet. It’s not quite full-blown reggae or ska either, though it would fit in any playlist of either genre. It’s a whole new thing.

There is no real chorus to “Mirror in the Bathroom.” And in fact every time you expect a chorus, here comes Saxa with an extended saxophone solo, carefully choosing his notes as if he’s trying to slow the song down, but totally failing.

Meanwhile, the stern talking to that Dave Wakeling is giving himself is getting ever darker:

But of course, those words seem so much darker on paper than they do with Wakeling and Ranking Roger singing them in unison (though it’s a shock when Roger drops out on the word “recompense”, never to return), but the beauty of “Mirror in the Bathroom” is that you could deliriously sing it without really paying attention to what it’s all about.

Oh, and I don’t remember for sure, but let’s say that my impetuous for finally purchasing I Just Can’t Stop it was the blistering set they played at the US Festival that year. Tim & I drove five hours each direction to go to the US Festival, and while The Beat weren’t part of the reasons we went, they ended being part of the reasons we were glad we went.

Official video for “Mirror in the Bathroom”

“Mirror in the Bathroom” performed live at The US Festival, 1982