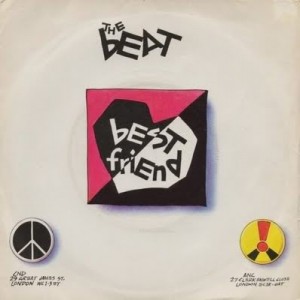 If I Just Can’t Stop It was the living embodiment of Pete Townshend’s maxim that “Rock ‘n’ Roll won’t eliminate your problems, but it will sort of let you dance all over them,” then “Best Friend” just might be the epitome of that embodiment.

But because every single one of those verses are filled with Ranking Roger’s harmony vocals, swooping in at the end of nearly line, and followed by those endlessly evocative guitars playing circles around each other with only Saxa firmly keeping them within the song’s gravitational pull, you — once again — don’t really care how mean the words are.

Or maybe you do. “Best Friend” one of those songs you can imagine dancing to with a soon-to-be-ex, both of you mouthing “Always you you you” at each other, both caring tremendously and not giving a rats ass at the exact moment because you both know it’s over, but it’s still so much fun to dance together.

In the end, when Dave & Roger just chant “I just found out the name of your best friend” until the fade, you can feel the disappointment in their voices, even as you’re wishing that the the song would go on forever.