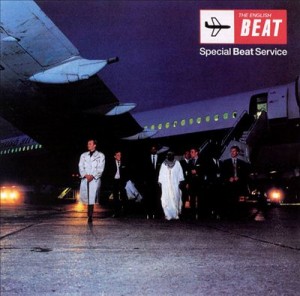 And a couple of months after I bought Wha’appen, I completed my purchases of The Beat’s three initial albums with Special Beat Service, which found them continuing to expand their music outwards, mixing songs from every conceivable genre with skill and glee.

That Special Beat Service would pull no punches was defined by the opening salvo, the incandescent soul burner, “I Confess.”

Underpinned by an insistent piano and a whole drum circle’s worth of percussion, “I Confess” opens with Dave Wakeling baring his soul about a recently-climaxed love triangle:

Just out of spite,
I confess I’ve ruined three lives
Now don’t sleep so tight
Because I didn’t care till I found out
That one of them was mine

Wakeling’s singing here is gorgeous, especially when he goes into the falsetto bits like as he sings “I confess that I don’t really care.”

So yeah, the music is slick and sophisticated, featuring swelling strings and even a long trumpet solo, not to mention the aforementioned falsetto, but it all works, and sticks with the finest Beat tradition of combining irresistible music with dark dark words.

Official video for “I Confess”