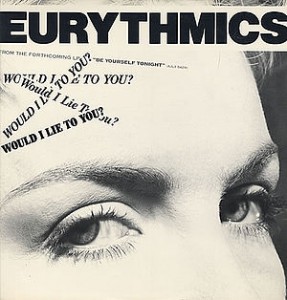 Album: Be Yourself Tonight
Year: 1985

I thought about writing about “Sweet Dreams (Are Made of This)” but even after all these years that song still seems unknowable by mere human beings while the glam-soul-trash aesthetic of “Would I Lie To You?” is right up my alley.

And as one of the few people in the U.S. who really enjoyed Dave Stewart’s and Annie Lennox’s pre-fame band, The Tourists — I’ll forever swear by 1980’s Luminous Basement — I wasn’t surprised that once they figured out how to get her voice and look on top of the weird-but-accessible soundscapes that seemed to come naturally to Stewart, they’d become a world-wide sensation.

And while I didn’t like all of the singles they issued during their run, the ones I liked, I really really liked, for example 1985’s boot-stomper “Would I Lie To You?,” which was a well-deserved top 5 single here in the U.S.

Sure, the 80s synth-horns seemed cheesy even then, and the lyrics are basically the title repeated over and over and over again, but none of that matters, because Annie Lennox.

Right? Lennox just freaking belts it out while Dave Stewart slides a rock guitar riff over a classic soul beat, a plethora of backing vocals, big 80s drums, echoes screams and everything else under the sun.

It’s overstuffed as hell, but it’s also fun as hell, and leaves absolutely no doubt that the answer to the title question is a resounding “yes!”

Official video for “Would I Lie to You?”