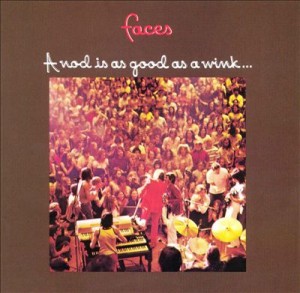 I’ve been trying to figure out for decades why I don’t unreservedly love the Faces. I mean, there isn’t anything in their sound or style that isn’t completely up my alley.

And their influence on things that I do love unreservedly — like The Replacements — is well-documented.

So it must be as simple as the fact that Rod Stewart kept all of his best songs for his solo albums, and — with a couple of exceptions — Ronnie Lane was never his equal as a songwriter.

“Debris,” of course, is one of those exceptions. It opens with Ron Wood quietly soloing over a bed of acoustic guitars and Ian McLagan’s electric piano as Lane sings:

I left you on the debris
At the Sunday morning market
You were sorting through the odds and ends.
You was looking for a bargain

“Debris” is one of those songs that just kinda floats like a faraway cloud, never quite coming into focus, but always inviting you to come closer and check it out. At some point Rod Stewart pops in to sing some harmony vocals, like he just happened to be hanging around the studio while they recorded the song and Ronnie Lane waved him on over to sing for a bit.

Meanwhile Ron Wood’s been playing leads throughout the entire song, but they never even come close to taking the song over, because it would be rude. So even his flashy bit that introduces his solo in the middle of the song feels natural and unforced.

I get that this is what people love about Faces: the unstructured nature of their best songs, and how they’re all contributing while noone is really leading. And that approach applied to a song as gorgeous as “Debris” always makes me wonder what else I’m missing.