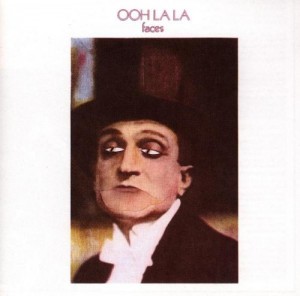 It must say something about Faces that their greatest song wasn’t just the last song on their last studio album, but also wasn’t even sung by Rod Stewart or Ronnie Lane, but rather Ronnie Wood.

Apparently both Rod Stewart and Ronnie Lane tried singing lead, but their producer — the incomparable Glyn Johns — suggested Ronnie Wood give it a try, and that’s the take they went with.

And quite naturally, all three men laid claim to the song as they got older and it kept having more and more resonance. “Ooh La La” is like that: when you’re young, you feel sorry for the granddad in the song, but you don’t particularly relate.

And in fact, I’ll probably never relate to the verses: they’ll always read too “women are evil” for me when I’ve always had the opposite experience with women. But while the grand-dad in the song is relating his specific experience, “Ooh La La” has a bigger lesson to give, I think.

Poor young grandson, there’s nothing I can say
You’ll have to learn, just like me
And that’s the hardest way
Ooh la la, ooh la la la yeh

Just because it’s a cliche doesn’t mean it ain’t true: over the years life kicks you in the ass and in the balls and repeatedly in the face, and you make every kind of mistake, and suddenly the chorus of “Ooh La La” can cause you to burst into tears:

And that’s where the genius of having Ron Wood singing pays full fruit: it’s his slightly damaged, but utterly empathetic vocal that gives the song an extra “oomph” of emotion. It’s as direct as the words.

Cazart! I haven’t even discussed the music of “Ooh La La,” cos I’ve been so fixated as outing myself as a middle-aged man who totally gets it, but the music is absolutely key to the greatness of “Ooh La La” as a near-perfect folk-rock song.

Based upon an circular acoustic guitar riff that also provides the melody in the chorus, my favorite musical part of “Ooh La La” is Ian McLagan’s piano solo, which comes in just when you’re expecting the second chorus.

At first, Mac is all barrelhouse and arrogance, playing a jumble of notes, fighting against the slow steady pulse of the song. But over time, it starts smoothing out, and eventually, he’s playing the melody of the chorus that he so rudely interrupted.

It’s a metaphor for the theme of the song!