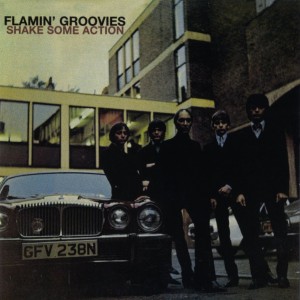 The guitars ring out, but they they also shimmer like moonlight on the open water, never quite coming into focus. The vocals are pretty much in tandem throughout, but they’re low in the mix, never quite surfacing, except when Cyril Jordan kicks off one of the guitar solos with a “whoo!”

And what exactly does “Shake Some Action” even mean?

Shake, some action’s what I need
To let me bust out at full speed.
I’m sure that’s all you need
To make it all right.

Does that mean he just wants the object of the song to shake? Or is maybe “Shake” his or her nickname? If it’s the former, does it mean some kind of dance? Or just to, you know, shake?

So even though Jordan’s laying it all out, it’s still somewhat mysterious.

And yet, “Shake Some Action” resonates in your head: from the simple riff that grounds it, to the double-time drums that drive the chorus, there isn’t a moment in it’s long-for-this-kind-of-song 4:34 that doesn’t yield immense pleasure.