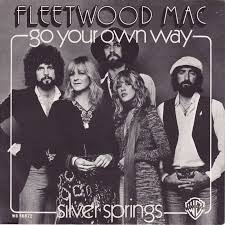 There is literally nothing else on the planet like “Go Your Own Way,” and no matter how many times I’ve heard it — and, seriously, folks, it’s one of the songs I’ve listened to the most in my life, voluntarily and otherwise — I’ve never even remotely gotten sick of it.

Of course, as a teenager in the late 1970s, Fleetwood Mac’s past as a blues band was something I’d only read about. For all practical purposes, their life as a band started with 1975’s Fleetwood Mac.

Which was a record that I didn’t particularly like — at least the songs I heard on the radio.

So I was caught totally unawares by “Go Your Own Way,” which came out just when I was rejecting Top 40 and embracing harder rock, but somehow straddled the line between both.

For one thing, there was that chorus — beaming through the radio directly from one of the rougher heavens — featuring the harmonies of Lindsay Buckingham, Stevie Nicks and Christine McVie playing call-and-response with Buckingham’s lonely voice:

How about about Mick Fleetwood’s drums? On the verses, he’s making waves on his toms, always just slightly behind the beat, always threatening to catch up but never actually catching up. Until the chorus, that is.

So when he does catch up, on the choruses, it’s almost a shock, and adds an extra oomph to the chorus that you might not even realize is there for weeks, months, years.

And of course the end, during Lindsay Buckingham’s last solo, not only does Fleetwood catch up, he gets out in front, dancing pirouettes around the guitar, letting Buckingham know the second Stevie actually goes her own way, he’s gonna be right there. Which just pisses Buckingham off.

Which is at least partially why Lindsay Buckingham’s guitar wins the song. His first solo is an absolute marvel of economy: with his guitar roaring like your neighbor’s car at 5:30AM, it’s all just a tease, he’s not really going anywhere right now.

Just warming up, but revving it just enough so you’re never gonna be able to go back to sleep, cos Buckingham’s simultaneously holding notes for infinity and doubling down on the space between those those notes like he’s fucking Miles Davis on “Shh/Peaceful.”

At that point, “Go Your Own Way” is pretty much broken in half: there’s no point in another verse, so the only left is on last set of choruses until Buckingham decides it’s time to take his guitar and get the hell out of there.

What follows is the reason I fell in love with this song on the radio, because when Buckingham comes back in, his guitar just scoops of the rest of the band and drives on down the road, firing on all cylinders.

And sure, Mick Fleetwood is causing trouble for a hot moment, but in the end, even his taunting drums are no match for Buckingham’s guitar, and eventually he’s back to providing the wheels for the trip.

So I loved “Go Your Own Way” so much, I had to pay attention to Rumours. Well, technically, I had no choice, as it dominated the radio and parties and was basically an as inescapable part of my high school years as furtive beer drinking and sexual frustration.

Which isn’t to say that it didn’t take me a few years — a couple of decades, really — to get enough distance from Rumours to understand just how brilliant it was, it’s just to say that understanding totally flowed from my eternal love for “Go Your Own Way.”

“Go Your Own Way”