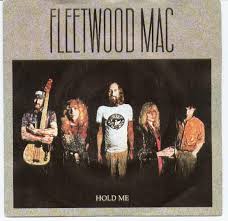 And really, it’s just the call-and-response chorus of “Hold Me” that I love. The piano-driven verses — sung in tandem by Christine McVie and Lindsay Buckingham, are actually pretty conventional. But that chorus — which is which is full of buried backing vocals, weird screams, and a Lindsay Buckingham guitar part that I’ve thought for over 30 years was a keyboard or a percussion instrument — is as gorgeous and weird as anything in their canon.

Also: Buckingham’s guitar in the coda, which ramps up from supportive to dominant in a matter of seconds and feels so out-of-nowhere that you listen to the entire song just to hear it again.

Official Video for “Hold Me”