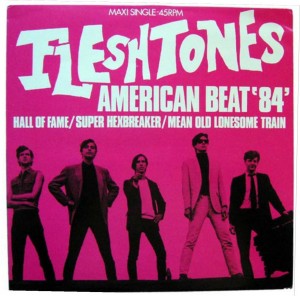 As the host of The Cutting Edge, Zaremba was effusive, intelligent and inquisitive — the perfect stand-in for his audience — all the while being in the inside of the scene enough that you could play a drinking game around him calling that week’s obscure rocker “my close personal friend,” a phrase which has been a go-to reference in our group for over 30 years.

As a band, the garage-rocking Fleshtones weren’t quite as successful. They brought all of the same qualities to their music as Zaremba brought to his hosting gig, as well as a joyful raucousness to boot.

But their songwriting never matched their enthusiasm, and while they made a few good records, they never made an eternal classic. That said, lotsa folks rightly loved their debut, Roman Gods and the follow-up, Hexbreaker could liven up any party.

“American Beat ’84” was a single that combined a couple of minor pop song trends. The first was a mid-80s trend: songs that reminded folks that despite the fact that the pop world was focused on the latest British Invasion, we still made music here in the good old U.S.A.

So like songs such as “R.O.C.K. in the U.S.A.” and “I Must Not Think Bad Thoughts,” the Fleshtones asked the musical question:

The other minor pop song trend was songs where at least part of the lyrics were just basically the singer listing other musical artists, like “Life is a Rock (But The Radio Rolled Me),” which was a top ten single in 1974 and The Hoodoo Gurus “Let’s All Turn On,” which probably lists some of the same people that The Fleshtones did.

This is an incredibly minor trend, of course, at least until The Hold Steady practically made a career out of it. But we’ll get there soon enough.

None of this is strictly necessary, of course: one might argue that in 1984, folks like Prince and Bruce Springsteen were doing just fine with their versions of the American sound, but I guess the point was that more people should have been listening to R.E.M., The Replacements, and even The Fleshtones in 1984.

Which, yeah, they should have.